on October 06, 2018
I recently started writing for DVS Gaming, a website that covers everything video games. I am writing mostly editorials, but I also have posted some articles that are just previews of upcoming games. But let's be honest. I can't write anything without my opinion popping in, so let's just call them all editorials. My most popular piece so far is an editorial about the upcoming Fromsoft game called Sekiro: Shadows Die Twice. It's also my longest, coming in at 1500 words.

Here is a little excerpt:

"One of the biggest changes for this game from its predecessors is the removal of any online multiplayer. This has me worried, and kind of annoyed, because let’s be honest here people. Sure, the tagline for Sekiro: Shadows Die Twice reads “Take revenge. Restore your honor. Kill ingeniously.” While those are great suggestions, we all know that I’m just going to spam R1 while rolling around on the ground as much as possible to avoid being hit while definitely wearing nothing but a loincloth if the option is available. It’s kind of my thing. It was kind of a lot of players’ things in Dark Souls. But this tactic only got me so far in the previous games. So I always welcomed side-kicks to help take down any boss too beefy to put up with my caveman ninja rolls and R1 spams of fury."

What is also exciting about working with DVS Gaming is something I found out just tonight. They invited me to go down to Pax South in San Antonio this January with a press pass. I have to get my butt down there on my own dime, but that means I will get to interview game developers and write original content about the conference. I have always wanted to write about video games, so I am so excited. While the website doesn't pay its writers yet (We'll see if that changes), it's still some writing credits under my belt and some opportunities I would not have had access to otherwise.

How else am I going to get game developers to let me interview them?

Keep an eye on my profile over on DVS gaming for my new articles.

Also, check out my twitter feed @JoshuaSkurtu if you want to see my comical and sometimes strangely dark poetry. I recently added a haiku. People like those, right? 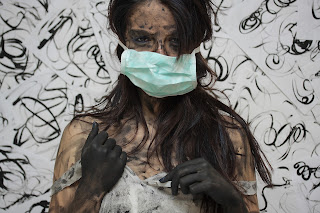 This post might get messy, but life does that. Avoid at all costs. My soon-to-be-ex-wife Angela is a sex therapist. This has always brought a great source of comedy into my life, and at times a lot of awkwardness. A few months back, Angela and I were discussing what gift to give her sister for her bridal shower. “You should get her a sex toy,” I told her. “They are getting married. They might need one.” “I can’t,” she said. “It’s my sister! It’s being thrown by her church.” “So what?” I said. “You’re a marriage therapist and a sex therapist. People expect you to give her one.” “Yeah, you’re right,” she said. I let out a sigh of ecstasy at having heard my favorite sentence. Oh, it’s the best sentence ever. “You know I love hearing that.” “You're so stupid. But it is a bridal shower,” she continued. “I guess you’re supposed to give that kind of gift.” It took a few hours to ferment. All great ideas must fester at the front of the cerebral cortex, growing like a

The first full episode of my new podcast is up! It's called the Helheim Podcast. In the first episode I speak with Editor Meghan Pinson about editing, outling, indie publishing, and really anything I feel like. This is actually the second episode, but the first one is simply a primer explaining what the podcast is about. You can check that one out below as well. You can find Helheim on iTunes, Google Play, Spotify, Podbean and plenty of other places if you wish to subscribe. About Meghan: Meghan Pinson of My Two Cents Editing Meghan Pinson provides expert editing, engaging critique, and fearless consulting to authors of novels and nonfiction manuscripts through her agency, My Two Cents Editing. She specializes in story development and author education. www.mytwocentsediting.com  Listeners can get a sneak preview to My Two Cents Editing's Indie-Publishing Workbook by emailing meghan@mytwocentsediting.com . Here is the intro podcast if you are curious about w 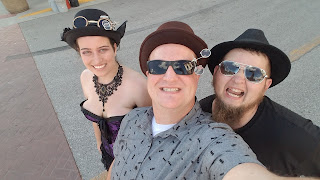 I've had a good week. Probably my best one in a long time. I got another interview lined up as a software developer, saw a lawyer (and it went well), got to visit with friends at a Steampunk festival, and on top of writing crappy poetry on twitter, I have finally started my next novel. I've also had a lot of time with my daughter. I've been busy and it feels good. At steampunk fest. Steam not pictured. I am still in the planning stage, and I don't normally talk about my stories at that point, but something funny happened today while researching for my next novel. I have a character I have put into two of my novels and one short story. He is slightly different in personality / backstory in every instance, but his name is Mateo. He is a wild card sociopath that launches cars at people as catharsis, a cannibal cult leader rampaging in hell, and a drug dealer that trades in fairy wings in another story. What's funny is that in my research into my next novel, his