Jesus and the Squid Queen - A NaNoWriMo Post Mortem 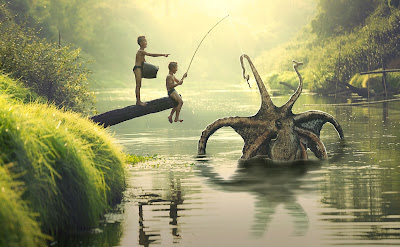 So, I did it! Yay… I wrote an entire novel in 30 days, and I actually finished on the last day of NaNoWriMo. I passed the finish line late this morning and it felt good. But for me the battle is not over yet. Just because I wrote 50k words doesn’t mean I have a complete novel. The reality is that most modern novels fall closer to the 70-90k range in length, and with the way this story is developing, I might hit closer to the 90k mark.

This year, I decided to also attend NaNoWriMo events known as “write-ins.” I did it for many reasons. One, it’s inspiring to be around other writers. Two, it’s a great place to make social connections. And three, I needed to get out of the damn house. I’m not working right now and ever since my divorce, the person I most frequently held a conversation with was my three-year-old daughter. And while I love talking to her, the depth of those conversations are minimal and the topic matter generally revolves around proper potty etiquette and different lists of either her favorite foods, favorite toys, or favorite characters. I needed to be around adults.

I got a lot out of the events and I met some amazing and interesting people, but something that shocked me when speaking to so many of them was that many had won NaNoWriMo multiple times but not finished any or most of the novels they had started with NaNoWriMo. This blew my mind. I couldn’t imagine putting in all this time on such a big project only to walk away from it. Last year, I actually failed to hit 50k by the end of the month. I don’t remember exactly what happened, but I stopped writing the last three days with only four thousand words to go. Something bad must have happened, and if you know anything about last year, I had bad things happen in buckets. Of 2017 I am not a fan! While I didn’t finish the 50k in time, I wasn’t done with the novel. I did exactly the same thing that I am planning to do this year. I set a secondary goal, with a much slower pace, say 25k in a month. I am going to write until I have a completed first draft of the novel, because I am writing a novel, not just the beginning of a novel.

I understand some people never have the desire to become a published author, but my goal as a writer is to publish. I love writing, but it takes a lot of effort and I would one day like to get something back from it. After I have the first draft, I will set it aside for a few months and then get to editing it. Until then, I will be hopping back in to do some final edits on my previous novel, “You’re All Going to Hell: A Love Story” before sending it out to agents again.


My Novel This Year: Jesus and the Squid Queen (working title) 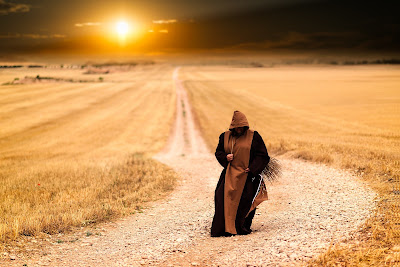 My novel this year has some oddities to it. Yes, everything I write is odd, says the man writing a blog called The Android’s Guide to Enslaving the Human Race, but this one has some interesting quirks aside from my regular insane cast of characters and psychedelic worlds. Put aside the fact that it’s populated by body-snatchers and a squid queen in space. First, I share the same name as one of the main characters. The problem with that is that everyone will assume I am writing him to be me. That is not the case. I didn’t choose the name Joshua for my character, but instead it was chosen for me. You see, the character in question claims to be Jesus of Nazareth. If you know anything of the history of the Bible, you will know that his real name was Yeshua, which is pretty much Joshua. In my story, he’s kind of pissed that they changed his name. “Who changes the name of the main character? Give the Greeks any artistic license and they bugger it up real nice.”

So, yeah, my new novel has Jesus/Joshua in it, and no, I don't have a messiah complex. No, I don't think I'm Jesus, no matter how amazing I am and no matter how often my wrists spontaneously bleed. If you are a Christian, you might not like it. It’s humor and I’m not religious, so fair warning. Jesus comes across as a pretty awesome guy in my novel though, because honestly I'm a big fan of his early work. ;-) In my story, it is 16th century Italy and Mateo Serafini di Bassi, the founder of the Capuchin order of monks finds Joshua on the side of the road face down, drunk, and claiming to be the basis for the stories of Jesus. Joshua claims he can turn water into wine and drunkenly stumbles over to a puddle of water. He points to it, but before he can do anything, he bends over and vomits a stream of red wine into the puddle. “That’s not what I mean to do, but you get the idea…”

Whether or not he is who he claims is part of the mystery, so I’ll leave it at that. There is also a secret world of people with godlike powers, and there's even a squid queen in outer-space named Denise that lives in a massive nebulae. The story isn’t finished, as I said before, but I do think it will turn out to be just as odd as everything else I write. It’s definitely not as dark as my novel set in Hell, but… well, it’s not set in Hell. Also, this one is completely devoid of any sex scenes so far, so I won’t have to warn my beta readers about that. My mother definitely had to skip huge sections of my first draft from last year. ;-)

The Android's Guide to NaNoWriMo

A Journey of 50,000 Words I love an impossible challenge. Some of the hardest things to achieve not only give the biggest rewards, but the journey alone can many times be satisfying. To a writer, one of the biggest challenges one can attempt is to write a novel to completion. It’s a long and arduous process that many people fail at. And one of the most insane ways of writing a novel is to join NaNoWriMo and write the entire thing in a month. Yes, the goal is to write a novel in a month. Crazy, right? Write a novel in a month? Only a lunatic would attempt that. Yeah, I'm going to do that... For those of you that don’t know what NaNoWriMo is, it stands for National Novel Writing Month, and it takes place every November. The goal is to write a 50,000-word novel in a single month. I have attempted it three times and though I did not win every time, I still got a lot out of it, and I made it to at least 40K words each time I participated. There are write-ins in person, chat

Why the New Joker Movie Should Actually Terrify You

Why the New Joker Movie Should Actually Terrify You Photo: DC Comics You should be afraid of the new Joker movie, but not because it might inspire violence. Not because it might create copycat killers. Not even because it might lead to a revolution of masked clowns seeking to kill the rich. You should be afraid because it’s already happening. Joker may seem like a dystopian 1980’s set in Gotham City, but it’s more like our modern society than we’d like to admit. And we don’t have Batman around to solve all our problems. Occupy Gotham In the movie, Arthur Fleck is a man tortured by his own existence, a man always down on his luck. One day, when he’s at his lowest, he takes the lives of three Wall Street bankers on the subway of Gotham city. The media coverage portrays the killings as the poor masses rising up against the Wall Street elite, united under the chant of ‘Kill the Rich.’ Sound familiar? This setting is a lot like our own world. In 2011, thousands of

The first full episode of my new podcast is up! It's called the Helheim Podcast. In the first episode I speak with Editor Meghan Pinson about editing, outling, indie publishing, and really anything I feel like. This is actually the second episode, but the first one is simply a primer explaining what the podcast is about. You can check that one out below as well. You can find Helheim on iTunes, Google Play, Spotify, Podbean and plenty of other places if you wish to subscribe. About Meghan: Meghan Pinson of My Two Cents Editing Meghan Pinson provides expert editing, engaging critique, and fearless consulting to authors of novels and nonfiction manuscripts through her agency, My Two Cents Editing. She specializes in story development and author education. www.mytwocentsediting.com  Listeners can get a sneak preview to My Two Cents Editing's Indie-Publishing Workbook by emailing meghan@mytwocentsediting.com . Here is the intro podcast if you are curious about w